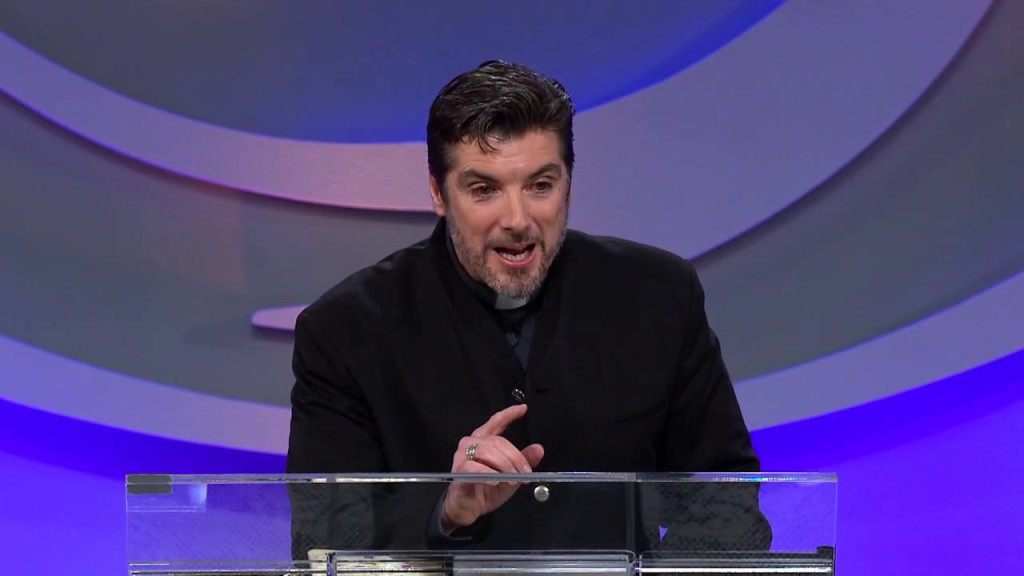 In a Conference attended by 3,000 leaders affiliated with Kenneth Copeland’s ministry, held in January 21-23, 2014, the Anglican bishop Tony Palmer presented a short video message from the Pope, recorded the previous week (January 14) by the bishop himself. In this video, Pope Francis sent a very personal message to the group:

“I am speaking to you as a brother. […] Let us allow our yearning to grow, because that will allow us find each other, to embrace one another, and together to worship Jesus Christ as the only Lord of history. […] Let’s give each other a spiritual hug and let God complete the work that he has begun. And this is a miracle. The miracle of unity has begun.”

Prior to showing this video, Palmer had to prepare the audience to what was coming. His goal was to make it appear that Protestantism was over, and that “division” was at an end. Accordingly, instead of addressing the issues that actually caused the Protestant Reformation, he attacked division itself, and labeled it as “diabolic”, but failed to mention Christ’s NOT uniting with the pharisees, and also Luke 12:50, where Jesus said: “Suppose ye that I am come to give peace on earth? I tell you, Nay; but rather division“. Here are Palmer’s own words:

“I’ve come to understand diversity is divine. It’s division that is diabolic. It’s true what you were saying about the glory; I agree with you on course of truth. The glory that the Father had He gave to Jesus. The glory was the presence of God. What is the Charismatic renewal? Is when we experience the presence of God. And he said: ‘And I’ve given them the Glory’ pragmatic reason, ‘so that they may be one’. It’s the glory that glues us together; not the doctrines. It’s the glory. If you accept that Christ is living in me, and the presence of God is in me, and the presence of God is in you, that’s all we need. Because God will sort out all our doctrines we get upstairs. Therefore Christian unity is the basis of our credibility, because Jesus said: ‘Until they are one, they will not believe.’ The world will not believe, as they should, until we are one.”

He attempts to cast a slur upon Protestantism by advancing the mistaken idea that the “division” was caused by Luther. Surprisingly, he seems unconscious of the original departure from faith and division caused by the Roman church in the time of Constantine and Sylvester. Consequently, by misrepresenting what the Reformation really is, Palmer tries to make it appear that the only reason for Luther’s protest was that he believed we are saved by grace, while others thought it was by works. Moreover, by citing that the 1999 Joint Declaration on the Doctrine of Justification between the Lutheran World Federation and the Catholic Church “brought an end to the protest”, he makes it appear that all differences are suddenly gone and “the protest is over”. He seems to be wholly ignorant of even Luther’s reasons for standing up against the Roman system. You may read one of Luther’s letters in this link, which clearly states what he was protesting against: https://www.freedomsentinel.org/appeal-to-his-imperial-majesty-and-the-christian-nobility-of-germany-on-the-reformation-of-christianity/.

However, this was not the first time an attempt was put forth to silence the persistent protesters and overthrow Protestantism. In Dec. 5, 1912, more than three hundred delegates from thirty-one “Protestant” denominations repudiated the word “Protestant”. They did this in the very first opportunity they had during the meetings.

And when the number of the delegates who actually were present and officially acting in the Council was made up and announced as ‘three hundred and nineteen,’ the statement was accompanied with the remark, ‘Just one more than the Council of Nice.’

Yes, the history of the Roman Church is largely told in her great Councils. And beyond all question her conspicuously great Councils were those of Nice, Constantinople, Ephesus, Chalcedon, Second of Nice, Trent, and the Vatican.

In brief the story of these ‘great Councils’ is this:

The Second Council of Nice, three hundred and fifty bishops, ‘unanimously pronounced that the worship of images is agreeable to Scripture and reason, to the Fathers and Councils of the Church.’

The Council of Trent put church-tradition above the Bible as ‘more sure and safe.’

The Vatican Council established the infallibility of the Pope.

And when the Federal Council in Chicago could count worthy of her aspiration such a record as that, then it certainly was about time that she were renouncing the name and title of Protestant.” (A. T. Jones, Lessons from the Reformation, chapter: “What is Protestant?”).

They repudiated the word “Protestant”. Bishop Palmer asserts that the “protest is over”. This requires an explanation of what the “protest” was, and what are the implications of it being “over”. This can hardly be better expressed than in the following words:

“What is the meaning of the word ‘Protestant?’ How came it into the world?

That Protest was made against the arbitrary, unjust, and persecuting procedure of the papacy in that Diet.

The religious liberty established by the Diet of Spires of 1526 was the result of a deadlock in the proceedings of that Diet over the enforcement, by all the power of the then papacy, of the Edict of Worms that had been issued in 1521 commanding the destruction of Martin Luther, his adherents, his writings, and all who printed or circulated his writings, or who on their own part should print or circulate the like.

Thus the Protest in which originated the word ‘Protestant’ was against the effort of the papacy to destroy the Reformation, and was in behalf of the Reformation and its principles.

And now for anybody to renounce, repudiate, or disown, the word or title ‘Protestant,’ is to repudiate the Protest.

Therefore, to renounce, repudiate, or disown, the word and title ‘Protestant’ is nothing less and nothing else than to repudiate the Reformation.” (Ibidem).

To repudiate the Reformation is to restore the Roman Church to absolute power, which will revive all the terrors of the Church and State unholy alliance. Freedom of conscience once again will be proscribed, and a new form of religious despotism will be established. The very principles that made the United States the great nation that it is will be repudiated. The separation of Church and State, which Christ Himself has established in the words: “Render therefore unto Caesar the things which are Caesar’s; and unto God the things that are God’s”, will be effectually vanished, and in free America, the Papal banners will triumphantly fly for a time.

But the principles of the Reformation are not dead by any means. They live in the heart of every true Christian. If there was only one person left to defend those principles, the Reformation would still continue, for it started with but a few individuals.

“And in and for all modern times the liberty of thought and independence of faith – the Religious Liberty – established as a natural and unalienable right of mankind by the Constitution of the United States, is the truest expression of the principle of the Protest that there is in any organic connection in the world.” (Ibid., chapter: “What ‘Protestant’ Means in America”).

We therefore declare that the Reformation is not dead. It lives. Truth will triumph. God lives and reigns. And the “sure word of prophecy” has already pronounced the fate of the Church who is called in the Bible the “whore of Babylon”: “Therefore shall her plagues come in one day, death, and mourning, and famine; and she shall be utterly burned with fire: for strong is the Lord God who judgeth her.” Revelation 18:8.

And this protest will be continued until the time that “Michael [shall] stand up, the great prince which standeth for the children of thy people: and there shall be a time of trouble, such as never was since there was a nation even to that same time: and at that time thy people shall be delivered, every one that shall be found written in the book.” Daniel 12:1. May the Lord arise a defend His people, “for vain is the help of man.” Psalm 60:11. “But they that wait upon the LORD shall renew their strength; they shall mount up with wings as eagles; they shall run, and not be weary; and they shall walk, and not faint.” Isaiah 40:31.