“And I beheld another beast coming up out of the earth; and he had two horns like a lamb, and he spake as a dragon. And he exerciseth all the power of the first beast before him, and causeth the earth and them which dwell therein to worship the first beast, whose deadly wound was healed. And he doeth great wonders, so that he maketh fire come down from heaven on the earth in the sight of men, and deceiveth them that dwell on the earth by the means of those miracles which he had power to do in the sight of the beast; saying to them that dwell on the earth, that they should make an image to the beast, which had the wound by a sword, and did live. And he had power to give life unto the image of the beast, that the image of the beast should both speak, and cause that as many as would not worship the image of the beast should be killed. And he causeth all, both small and great, rich and poor, free and bond, to receive a mark in their right hand, or in their foreheads: And that no man might buy or sell, save he that had the mark, or the name of the beast, or the number of his name. Here is wisdom. Let him that hath understanding count the number of the beast: for it is the number of a man; and his number is Six hundred threescore and six.” Revelation 13:11-18.

“By the decree enforcing the institution of the papacy in violation of the law of God, our nation [the United States] will disconnect herself fully from righteousness. When Protestantism shall stretch her hand across the gulf to grasp the hand of the Roman power, when she shall reach over the abyss to clasp hands with spiritualism, when, under the influence of this threefold union, our country shall repudiate every principle of its Constitution as a Protestant and republican government, and shall make provision for the propagation of papal falsehoods and delusions, then we may know that the time has come for the marvelous working of Satan and that the end is near.

“Through the two great errors, the immortality of the soul and Sunday sacredness, Satan will bring the people under his deceptions. While the former lays the foundation of spiritualism, the latter creates a bond of sympathy with Rome. The Protestants of the United States will be foremost in stretching their hands across the gulf to grasp the hand of spiritualism; they will reach over the abyss to clasp hands with the Roman power; and under the influence of this threefold union, this country will follow in the steps of Rome in trampling on the rights of conscience. . . .

“Papists, Protestants, and worldling will alike accept the form of godliness without the power, and they will see in this union a grand movement for the conversion of the world and the ushering in of the long-expected millennium.

“When our nation [the United States] shall so abjure the principles of its government as to enact a Sunday law, Protestantism will in this act join hands with popery; it will be nothing else than giving life to the tyranny which has long been eagerly watching its opportunity to spring again into active despotism.” 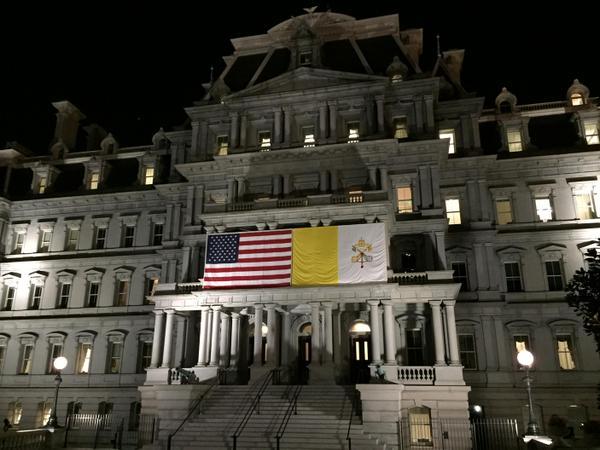 “And I beheld another beast coming up out of the earth; and he had two horns like a lamb, and he spake as a dragon. And he exerciseth all the power of the first beast before him, and causeth the earth and them which dwell therein to worship the first beast, whose deadly wound was healed.” Revelation 13:11-12.

September 24, 2015, will be one of the most regretful days of American history. This day will be eternally remembered as the day in which this free country, who prized civil and religious freedoms as more important than life itself, has, through its legislative branch, opened its arms to receive the representative of the Catholic Church — a system which historically has been the enemy of religious freedom and liberty of conscience.

“The Constitution of the United States guarantees liberty of conscience. Nothing is dearer or more fundamental. Pope Pius IX., in his Encyclical Letter of August 15, 1854, said: ‘The absurd and erroneous doctrines or ravings in defense of liberty of conscience, are a most pestilential error—a pest, of all others, most to be dreaded in a State.’ The same pope, in his Encyclical Letter of December 8, 1864, anathematized ‘those who assert the liberty of conscience and of religious worship,’ also ‘all such as maintain that the church may not employ force.’” (Josiah Strong, Our Country, 1885, p. 47).

The laws and principles of the Church of Rome are absolutely antagonistic to the laws and principles of the United States of America. History has been stained with the crimes committed by Rome. It was to prevent the despotic rule of the Church that the framers of the Constitution established a clear separation between church and State. The Protestant Reformation made it possible for people to follow their conscience in matters of religious duty, but the Romish Church, seeking to bring back those countries which had broken its yoke, launched the counter-reformation, and set itself to accomplish by craftiness what it could not do by force. Unfortunately, Protestants seem to be blindfolded to what the Papal Church is endeavoring. They imagine that the Church has changed, but it has not. It will never relinquish its claim to infallibility.

“The pacific tone of Rome in the United States does not imply a change of heart. She is tolerant where she is helpless. Says Bishop O’Connor: ‘Religious liberty is merely endured until the opposite can be carried into effect without peril to the Catholic world.’” (Idem).

By invitation of John Boehner, the Speaker for the House, Pope Francis will “make history as the first Pope to ever address a joint meeting of Congress”! Can you imagine if the founding fathers could see this happening? What could be worse than that? Religious freedom was as dear to themselves as their civil freedom. Protestantism and Republicanism were the pillars that made this country achieve its greatness. But, as someone has said, “ignorance is the enemy of Freedom”. If you don’t know what Romanism really is, you will most likely be charmed by it. But, fortunately enough, history has preserved the evil deeds this system has perpetrated. Books such as “History of Protestantism”, by James A. Wylie, “Ecclesiastical Empire”, by A. T. Jones, “Fifty Years in the Church of Rome”, by Father Chiniquy, and a host of other books, will serve to enlighten anyone who whishes to know the character of this despotic system.

It does not take long to find that wherever the Romish Church has had its power in unrestricted sway, the fires of persecution burned hot against those who would not yield their God-given right, the right of conscience and of religious liberty. The Papal system has murdered more than 60 million people in the Middle Ages, and, should it receive the same power again, that number might seem a small fraction of the slain. For more than fifteen hundred years, it has proved again and again that it is fundamentally contrary to liberty. By torturing those who disagreed with them, and burning at the stake those who would not recant, this tyrant has silenced the protest of the “dissenters”.

Then what reason can be given for the Senate and House of Representatives of the United States to receive the leader of a system so contrary to civil and religious freedom? And by what misfortune is he speaking to the LEGISLATIVE branch of this country? Do they suppose that they can now befriend this despotic system? Do they even fathom that by this act they will, in future developments, throw this country into a religious despotism? Should we be silent when we see the danger approaching? Should we allow it without any protest? Absolutely not!

We, the free people of this country, do most decidedly PROTEST against this attempt against liberty! We protest against the Senate and the House of Representatives inviting the Bishop of Rome to speak to them. We protest against the breaking the safeguards of this free Republic. We protest against this union with the papacy and we warn all the people of the world that this will be one of the last steps before Earth’s final destruction. Free America will join hands with the enemies of freedom, and will form an image to the beast (Revelation 13:14). Then, this country will become the persecutor, and Protestants will too late regret this unwise step in inviting the enemies of Christ to be their friends.

What can you do:

It is dangerous to forget. It is a safeguard to remember. History is a lesson book that displays an abundance of trial experiments of frightful human attempts to exalt themselves and control the minds of others.

Religious Liberty is a divine gift to humanity. It is essential to the full development of human beings. This liberty has come to us today at a very high price. It cost the lives of tens of millions of people that would not yield their conscience to another person.

This history is to be kept in mind if we are to avoid repeating it and plunging the world into another phase of the Dark Ages, only that this time it will be worse, for humanity has developed improved methods of coercion and investigation.

Watch out, sentinels! When you see the doom approaching, fear not to lift up your voices. If we be quiet now, we may not have a chance to say anything else.